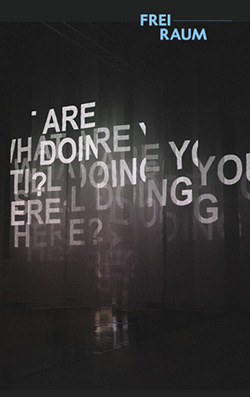 The Place, It Has a Name

The Freiraum project “The Place, It Has a Name”, by Lisa Kohl, Elsa Rauchs and Ian De Toffoli is a multidisciplinary project, using poetry, video, text projection, photography, soundscaping, drone noises, music, pre-recorded voice-over and a live performance during which all these elements concur to implicitly formulate a simple but important question: how do we make choices in life?
In a pre-recorded voice-over, a woman’s voice slowly and immersively tells the story, through the eyes of a first-person narrator, of an unnamed character, who wakes up, on an average day – he or she has to go to work –, drinks her coffee too quickly, races down the flight of stairs of her apartement building, but then pauses because she notices that something is off. The whole city is covered in mist, and as she walks down the street to find her bus stop, she doesn’t recognize anything anymore and the more she walks on, the more the landscape surrounding her begins to change, to fall into ruins, or to evaporate and disappear. Finally, an unknown man in the mist walks up to the narrator and asks what she is still doing in a city, swallowed by the fog, that everybody else seems to have fled or abandoned. The narrator seems at a loss, realizing that she is in a completely different place altogether, or maybe she is nowhere (not in the material world) anymore.
The story culminates with the appearance of the woman behind the voice (Elsa Rauchs) on stage, making an attempt of defining, through a poetic list of oxymorons, the “moment of ultimate freedom”, which is: the infinite albeit incredibly brief moment right before a choice (a decision) is made.

While the story unfolds, images of untrodden paths in the woods, of mouldy cellars, of mist-drowned plains, or streams of water appear on long white veils that hang from the ceiling. Rather than retelling the same story, they (the images, but also the sounds and noises) rhythmically accompany the story through associative imagery that leaves everything open to suggestive discovery and interpretation. Thus, “The Place, it has a name” is a multi-layered installation, which takes the spectator on an immersive journey, but builds up its signification and meaning through the combination of its different artistic elements.
Largely inspired by Tarkovsky’s movie Stalker, which tells the story of a mysterious place called the “Zone”, at the heart of which there’s a room that grants all the wishes to whoever steps inside, “The Place, it has a name”, reimagines the “Zone” as a place of meandering, of errancy, of loss of control, and thus, of a certain kind of freedom which has to be uncovered by the narrator.
Finally, the installation asks the question of man’s desire for fulfilment and what the terms of such fulfilment are: security, goods, spirituality, idleness, or even letting go.
“The Place, It Has a Name” is part of the FREIRAUM (Free Space) project of the Goethe-Institut. The aim of the project is to assess the state of freedom in Europe’s cities. In Luxembourg and Rijeka the project has been jointly carried out by Institut Pierre Werner and Goethe-Institut Kroatien with the help of the University of Luxembourg, Kasemattentheater, Luxembourg Center for Architecture and Drugo more.